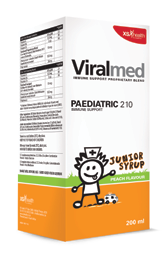 Your natural antibiotic to help combat and prevent infections.

Viralmed Paediatric is a comprehensive blend of NATURAL ANTIBIOTIC, ANTI FUNGAL & ANTI-VIRAL substances, as well as ANTIOXIDANTS which have been shown to protect the body against the development of illnesses caused by viruses, bacteria and protozoa. As a natural antibiotic and anti-viral Viralmed Paediatric may also assist in the treatment of many of these conditions in children, especially during the resistance to conventional antibiotics, which so often occurs due to misuse and overuse of antibiotics. While bacteria contain the genetic material to resist synthetic drugs, this does not seem to be the case with the natural agents used in Viralmed Paediatric